Mr. Hurst's website
10.6 - Unresolved Global Conflict (1945 to 1991 – The Cold War)
The second half of the 20th century was shaped by the Cold War, a legacy of World War II.
The United States and the Soviet Union emerged as global superpowers engaged
​in ideological, political, economic, and military competition.
A great deal of focus is on the Cold War during the school year. What took place during these times has led us to where the world is at the present time. To start this section, I have added the Post-War Europe lesson, a handout for a summary of the Cold War and an extensive Timeline of the Cold War. A very unique way of showing the events of the Cold War is by using an interactive map of the Cold War (thanks to Jeffrey Shen and Free Technology for Teachers @ freetech4teachers.com). Some of the major events that took place are seen with the Marshall Plan shown using a map and how NATO and the Warsaw Pact developed. In addition, the Hungarian Revolution of 1956 was one of the first events that opposed the communist system of the USSR.

The Space Race begins with Sputnik which was the first Soviet satellite into earth's orbit that eventually led to the United States landing a man on the moon.

There were many social and political changes during the Cold War and some of these are illustrated in the handout on The Berlin Wall and in the Fidel Castro and the Cuban Revolution of 1959 handout that resulted in the global threat with the Cuban Missile Crisis. The end of the Cold War is associated with the Decline of the Soviet Union handout and the fall of the Berlin Wall.
There were other events in the world not directly linked to the USA/USSR battles for power. Other areas of focus during this era are ethic tensions in Eastern Europe and a country once known as Yugoslavia that is validated with the chart showing the ethnic differences in former Yugoslavia.

The Mexican Revolution of 1910 and the Constitution of 1917 is a key document and the region will undergo further changes in the handout on Modern Latin America. The continent of South America is still having many political struggles and an excellent insight is seen with this special reading document called "I Invoke You". 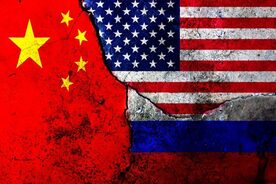 Extra Credit Assignment for this unit, ​Unresolved Global Conflict (1945 to 1991 - The Cold War)