Mr. Hurst's website
Unit 5 - Industrialization and Urbanization (1870-1920)
What started with the Industrial Revolution in England soon spread across the Atlantic to the United States. This era in American history starts with the handout on The Gilded Age and the politics that dominate this time period of history. What was to follow would be the creation and development of the Industrial Empires from 1865 to 1900 and the changes they made to American society.

The presentation of Early American Inventions, show the rapid growth and expansion that sweeps across the nation.

Perhaps there is no better example of this advancement than with some pictures of the first American steam engine. The first American-made sewing machine totally changes the labor force of America, especially including the role of women in the industrial world.

Finally, the who was William H. Seward and what was Seward's Folly document completes this section of national expansion linking to the purchase of Alaska for a very cheap price. ​ 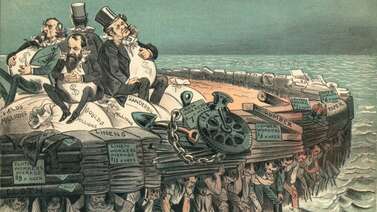 These new technologies and economic models created rapid industrial growth in the late 1800's. American society would be transformed, for better or for worse during this time period. This handout on the Growth of Corporations, identifies both the theories and the people involved in this major change to American society.

Who were the Progressive Presidents? This handout looks that this series of unique Presidents and I have included a short history of Teddy Roosevelt, Long Island's own President. He is responsible for many changes in American society that include the building of the Panama Canal in pictures.

The political issues during this era were complex and they are best understood with the Urban Political Machines document and the political cartoons showing the downfall of Boss Tweed.

Urbanization was rapid during these times and the Rise of the City handout tells through different testimonies, insights to life in urban areas such as New York. Along with the rapid growth and the flood of immigrants to the cities came Urban Problems that illustrate the changing populations and the harsh living conditions and changes within society. It was during the late 1800's that a famous book was written by Jacob Riis called How the Other Half Lives. He decided to live in the urban slums of New York and write about his experiences. The first link is a handout with key questions that is an extract from How the Other Half Lives. This handout describes the different urban enclaves in New York and contains a map that links to the text. The next document discusses the poverty in the urban slums, and it is the actual testimony and eye-witness account of Jacob Riis.  To give you an idea of how the "Melting Pot" of New York City has changed, I have created a handout on the Ethnic Enclaves that details the components found within cities relative to its immigrant inhabitants. To supplement this, I have added a table showing the various ethnic areas of New York City in the present day. 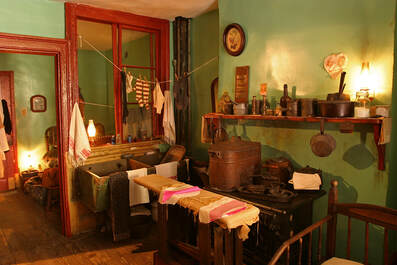 The consumption of alcohol was a major concern in these times and the prohibition movement gained strength, indicated in the presentation of Temperance Posters of the late 1800's. Life for the immigrant, the poor, and the working class was extremely difficult. Their society issues are express through a set of photographs showing Early child labor in North America, their living conditions with the Tenement Improvement Plan and the Triangle Shirtwaist Factory disaster.

​The political ideology of socialism began to spread in the industrial centers. Who was Eugene V. Debs? is a lesson created to tell of his story and attempts to change American society. It was not only the immigrant suffered, it was also the African Americans also had their struggles. 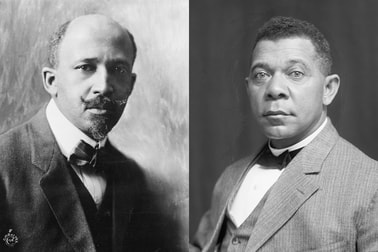 An additional section on immigration with primary source documents
The role of the average immigrant during these times is seen in this handout along with Selected immigrant poems, each telling a unique story of an immigrant family. If you are a New Yorker you know her but do you know these facts about her found in the handout Who is Lady Liberty?

A short history about Mary Antin, a table showing Famous Ellis Island immigrants and a lesson on the history of Coney Island show positive reactions to arriving in America. However, not very immigrant was welcome. The Immigrant Restriction League was against  immigration and the lesson on Chinese immigration to America and the Chinese Exclusion Act of 1882 tell of a different story towards foreigners.

​A special look at American culture during this era
​The following are not curriculum requirements but I have created the following five links to show what life was like during these times. A handout containing some Pictures of New York City around 1900 (no text, just pictures) make the city come to life. A presentation of some of the art of Currier and Ives depict a unique time in American history. Please note the introduction and the first few slides as they tell a local story.

Yard sales can be fun and I found the following three items from which I scanned certain pages and created presentations that are an extract from an early Sears catalog, a cookbook from 1900 extract and copies of pages from a 1914 Music Magazine from New York City. ​ 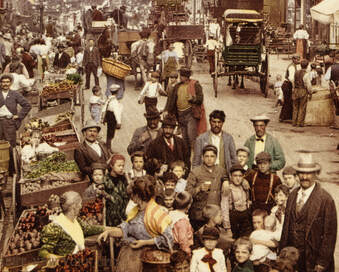