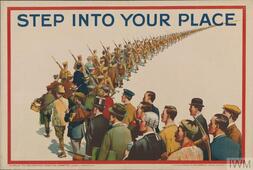 The Balance of Power across Eastern and Western Europe was in great danger with the decline of the Ottoman Empire, the Sick Man of Europe, and this lesson covers the events that took place prior to World War I. In addition, I have included an article that covers the Crimean War and a unique document on the making of the Victoria Cross medal. The Crimean War is also known for a famous poem, The Charge of the Light Brigade, which is one of the last known cavalry charges in world history.
​​
I try to cover these next two lessons as close to April 24 as possible. Every year I get the same response from my students "why did I not now about this happening." These two links, the Armenia master lesson and the presentation on the Armenian Genocide tell of a brutal story that is still controversial today. I also go one step farther after the lesson. I allow my students to go on Twitter and read what was posted this day by the Kardashians, especially Kim as they are Armenians. ​ 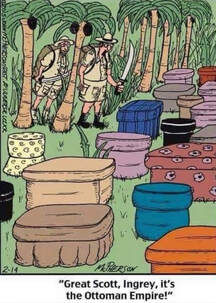 This special lesson is a World War I search for maps and images. Download this word document and "enable editing."

2018 was the 100 year anniversary of the end of World War I. My grandfather served in the Gordon Highlanders during the Great War and every day on November 11th. I wear a red poppy in my lapel in his honor. The following links are a compilation of handouts, presentations, pictures and maps that cover the "war to end all Wars." They are the World War I lesson in print form, a World War I presentation which is supplemented by a short document on the Battle Weapons of World War I. One of the reasons for America joining the war was the Sinking of the Lusitania and once they declared war on Germany, the nationalism and patriotism of the American people is clearly seen with the lyrics for the  "Over There" song.  To commemorate the 100 year anniversary of the end of World War I in 2018 I created these slides that have no text for use in the classroom.

The 2019 AP World History examination Free Response section was graded in Kansas City, Missouri and I was again fortunate to have been a reader for the exam. It was the first time that we had graded in Kansas City. We were fortunate that one night after the reading, we were allowed after hours to tour The National World War I Museum and Memorial. In addition to the hundred of artifacts that they have on display, they also have some excellent on-line educational sections on their website. Please open the above link and look at the Online Exhibitions that are shown as they add so much more to the learning experience.
The following  links summarize the end of the war. They are a chart of the Statistics for World War I, a handout and list of the Fourteen Points proposed by Woodrow Wilson and a Map of Europe after World War I.  In addition, I have created a chart showing the Peace Treaty Provisions of World War I  which were signed and enforced on Germany, Austria-Hungary and the Ottoman Empire at the end of the war.

​After World War I, Germany struggled to pay the reparations and the value of their currency became worthless. This short handout with actual pictures covers the Hyperinflation of Germany in the early 1920's. ​

Revolutions and emerging political changes are major issues during this time period. The rise of communism and political dictatorships dominate the era. It begins with the Russia Reaction and Reform lesson and the consequences of the Russo-Japanese war identified in this map. Two other documents that show political change are a Lenin propaganda  poster from 1917 and a propaganda poster of the key Soviet leaders from left to right Marx, Engels, Lenin and Stalin.  ​ Lenin's ideas however were not totally successful, as seen in this handout called NEP (New Economic Policy), the failure of which will help lead to the rise of Joseph Stalin.

To complete the section on the Soviet Union is a lesson that covers the Five-Year Plans of Joseph Stalin.  The handout covers both the positive and negative aspects of his ideas for the nation.
​
The emergence of communist China is seen in this next section. It begins with the East Asia in 1914 map that transitions to the China 1900 to 1976 lesson and a photo of Chiang Kai-shek. I have created the Mao's Revolution document and China under Mao maps and photos. Major changes in China will take place with China under Japanese control 1926 to 1936 map which will change after World War II leading to the Great Leap Forward presentation followed by the Great Proletarian Revolution poster.

​The Great Depression and the New Deal after the  Stock Market Crash in 1929 will start an era of economic and political chaos that will eventually lead to World War II. In Europe the changing political ideologies lead to the rise of Fascism and the subsequent Spanish Civil War lesson and the following map of the Spanish Civil War
I have created a Prelude to World War II chart along with a handout of the Nazi Party and their rise to power. The following Hitler and Mussolini picture shows the interaction between these two men. Meanwhile in Asia there was a Japanese military build up prior to World War II and between Germany and Japan and the failure of appeasement, war was inevitable.

This document opens to a presentation that covers a Timeline of the Major Events of World War II. I have tried to add the best images, maps and pictures possible to depict the events in each frame.

Both of my parents served during World War II and my grandparents were involved with the Home Front in England. The British spirit could not be broken by the German bombings of the major cities and this document is a special Battle of Britain presentation followed by a unique document, A prayer during the London Blitz.
​The Holocaust handout and a four-page document on Hitler and the Holocaust summarize the genocide that took place across Europe during World War II.

The United States enter the war after the attack on Pearl Harbor on December 7, 1941 which was followed by this primary source document of the Pearl Harbor address to the nation by FDR. The Home Front presentation illustrates the importance of rationing, war bonds and domestic patriotism during times of war. World War II will finally end with the surrender of Germany on VE Day and then Japan on VJ but not after the dropping of the two bombs on Hiroshima and Nagasaki. The effects of these actions is seen with this extract of primary documents that is created into a Hiroshima Stories special lesson. To conclude this section and to segue into the next unit, I have added a map of Postwar Europe to show how Europe was geographically and politically restructured after World War II. 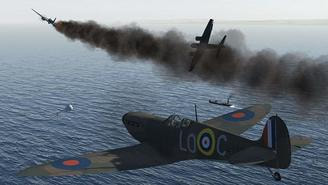