The course begins with an overview of some of the material from 9th grade. This will be done in both geographical and chronological order.  We will then move into the specific content areas that start below and continue into the attached sections.
A good place to start is with an overview of Africa, as seen with the Physical map of the continent.
Advanced civilizations were present in Africa before the arrival of European explorers and conquerors. The Bantu migrations lesson offers an insight into technology and scientific knowledge not previously associated with Africa. To validate the handout, this link opens to a map of the Bantu Migrations across Africa.

There were other ethnic groups within the continent and an introductory overview is seen with the map showing the early African civilizations.

The African continent also had strong religious connections to both Islam and Christianity that emerged from trade. Abyssinia, later known as Ethiopia will be a religiously diffused nation and part of this mix is seen in a special reading on Coptic Christianity. Trading in the Indian Ocean region will develop because of Islamic merchants but prior to their arrival advanced civilizations lived along the coastal regions, as seen in the East African kingdoms handout. Other important regions in Africa that developed during this time period are seen in the Early civilizations of West Africa lesson which is accompanied by a special reading on Salt Traders.
World history books often overlook how advanced societies were in the Americas prior to the arrival of the European explorers. The following documents, handouts and lessons will try to explain and show how these civilizations were structured. There were many diverse cultures in the Americas and an excellent way to see this is by looking at the Native American Cultures map link. An in-depth handout called North American Native People is about the Ancestral Pueblo and Mound-Building cultures of North America.

In addition, special focus is given to the societies of the Mesoamerican Empires and the handout accompanied by a map of Mesoamerican city-states offers a concise view into their ways of life. Two other areas of focus in this region are the civilization of the Maya and a map with photographs of the Incan Empire and the Incan Road system. ​ 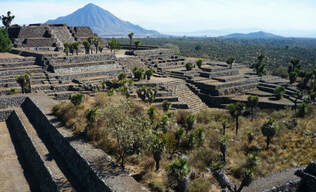 Looking at Asia will begin with an overview of the Song Dynasty in China and a look back at a Table of Dynasties in China and an illustration for the Dynasty Cycle. Cultural Diffusion spread across much of Asia and this is best seen in the Chinese influence over Korea and Japan document and then a map showing Chinese influence over its neighbors. One of the key components to this cultural interaction came about due to religion. In this region the handout on The Three Schools of Buddhism illustrates how peaceful interactions changed many societies. To supplement the text lessons, I have included the Spread of Buddhism map and the Spread of Hinduism and Buddhism in Southeast Asia map. In concluding this section, I have created two relevant documents, the first is the ​lesson on The Diverse Traditions of Southeast Asia. The second document is an overview of Early Empires and Kingdoms in Southeast Asia, a region that flourished from trade and the diffusion of both Hinduism and Buddhism. Finally, to complete this section of the unit, an excellent reading with key questions is the story and the travels of Xuanzang (Hsuan-Tsang) a Buddhist monk who travelled eastward spreading his religion. Please open, read and answer the questions at the end of the document.
The Three Monotheistic Religions comparison chart creates a better understanding of Islam and the growth of this religion during this time period. A key document to learn is a Timeline of Islam that also contains a glossary, maps, and a video link.  In addition, for classroom use I have added another Spread of Islam map.

Special focus in this unit is given to the Abbasid Caliphate in this handout as they were an integral part of the spread of Islam across the Middle East. Within the city of Baghdad will be the House of Wisdom, a major Islamic learning center. To put this Golden Age of Islam into a fuller perspective, the following link goes to a short video (5.47 minutes) called The Founding of Baghdad City and it places the Abbasid Caliphate in a more global context. A more in-depth approach to this section is found in a scholarly reading on The Islamic Economy and Society as it illustrates a "bigger picture" within the Islamic empire. A major part of the expansion of Islam was created by the emergence of a culture known as the Turkic people. This short handout offers an insight as to their geographic origin and cultural diffusion across the Asian continent.

For those students who are avid science or arts learners, the following document, despite being lengthy, offers two biographies of famous Muslims, Nasir al-Din al-Tusi and 'A'ishah al-Ba'uniyyah.