​The best way to start this section is by opening, completing and learning the outline maps of the United States. In addition, also learn the three maps that are links on the bottom of the U.S History homepage [The Fifty States, Physical and Climatic, and Regions of the United States].

The Americas changed with the arrival of the Spanish and other subsequent European nations after Columbus. the following is a chart of the most important European Explorers and it is expanded by the Exploration, settlement and discovery handout. The European treatment of the Native Americans and the European Colonial government chart best explain the new social and political systems developed in the Americas.

The organization called Learning for Justice has created several videos that I use in the classroom. Their latest video called The Forgotten Slavery of our Ancestors covers the enslavement of Indigenous Peoples in the United States, a story that is overlooked by many.  The video is just over 12 minutes in length and an important part of understanding the real story behind the arrival of the Europeans in America.
[It is the first video of the series and later in the school year I will also show some of the other short videos].

We know them as pilgrims and we celebrate their arrival very Thanksgiving but who were these people and why did they come to the New World? The answers can be found in the lesson in the Puritan Migrations to the Americas handout and the signing of the Mayflower Compact, a very important document in American history. Their original destination was the colony at Roanoke and I have added a recruiting poster for the Virginia colonies to show how these crossings across the Atlantic Ocean were promoted.

The climate and geography of the East Coast of America played a major role in the development of the Thirteen Colonies and this handout illustrates the differences. How the British developed the Thirteen Colonies is seen within this lesson and combined with an important Thirteen Colonies map it all helps to show life in a Colonial Society with this important lesson handout. A typical New England village drawing clearly shows what life was like in these times and the importance of a cohesive society. Another way to better understand these times is seen through a sample of a colonial newspaper. ​ 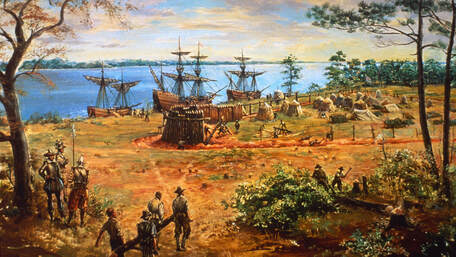 The American History timeline from 1675 to 1700 will help link changes in society and the following documents help show who the new immigrants and their traditions and customs were. The Shakers came from the northwest of England and the Great Awakening lesson and the Great Awakening pictures to accompany the lesson tell of the religious complacency that took place in the northern colonies.

An important handout that validates the political processes during the Thirteen Colonies is Early Colonial Self-Government Systems and it covers the first attempts of creating a democratic system in America.

Travel to the colonies was hazardous, emphasized with a lesson on shipwrecks. I have also added some of my pictures of early Boston and an overview of the Whaling Industry which was an integral way of life, especially on Long Island and New England.

Colonial society was agriculture based and the following documents discuss the labor needs of early American society. The first is an ​Indentured Servitude presentation that will lead to the beginning of slavery in America. Local history is learned through Slavery on Long Island from primary documents and a picture presentation of the African American Burial Ground in New York City. ​ 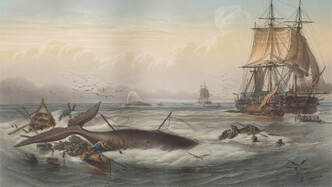 Additional local history: You may have read or will read one day The Legend of Sleepy Hollow, written by Washington Irving. Sleepy Hollow is in Westchester Country adjacent to the Hudson River close to the Mario Cuomo (the Old Tappan Zee) bridge. The area was originally settled by the Dutch as part of New Amsterdam. In 1685 the Dutch settlers built a church with a burial ground (Old Dutch church). The picture below, taken by me in August, 2020, is of the church. The grounds are supposed to be haunted by the "headless horseman." ​ 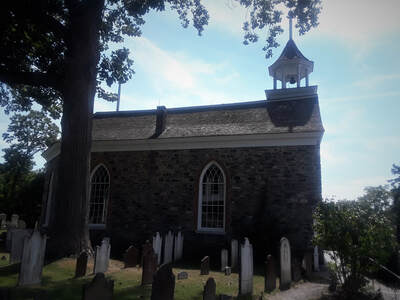 “Indeed, certain of the most authentic historians of those parts, who have been careful in collecting and collating the floating facts concerning this spectre, allege that the body of the trooper, having been buried in the church-yard, the ghost rides forth to the scene of battle in nightly quest of his head; and that the rushing speed with which he sometimes passes along the Hollow, like a midnight blast, is owing to his being belated, and in a hurry to get back to the church-yard before daybreak.”
The Legend of Sleepy Hollow (a cool place to visit on Halloween night).
There are many famous people buried in this cemetery along with Washington Irving. It is the final resting place of Samuel Gompers, Andrew Carnegie, William Rockefeller, Elizabeth Arden, and both Harry and Leona Helmsley. ​ 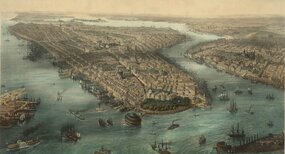