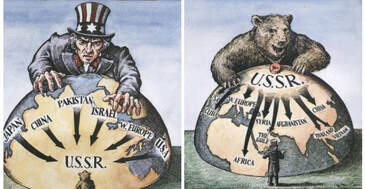 The end of World War II drastically changed the political structure of the world. Countries that were once ruled under Imperialism demanded and fought for their independence. and then there was the Cold War. This unit covers these two sections, starting with the Cold War. To better understand the European situation I have created a Post War Europe handout that highlights the various political actions between democracy and communism, the dividing forces of the world. I have added three links that are the  summary of the Cold War taken from the Encyclopedia Britannica, an extensive Timeline of the Cold War showing brief facts and pictures relating to each event and finally the attached opens to an interactive map of the Cold War (source: With many thanks to Jeffrey Shen and Free Technology for Teachers @ freetech4teachers.com).

I have added other links that validate the events in Western Europe that are a map of the Marshall Plan that shows the NATO and the Warsaw Pact nations. 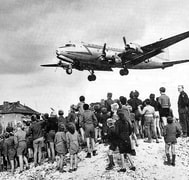 ​The space race and sputnik sent shock waves around the world as when this satellite was first detected, people thought it was some kind of nuclear weapon and a threat to global security. The divide of East and West is seen with the building of the Berlin Wall and this lesson covers its rise and subsequent fall. The Hungarian Revolution of 1956 and the Cuban Missile Crisis were major conflicts that were part of the causes and effects of the Cold War that would eventually see the decline of the Soviet Union shown here in a timeline of the events.

The following handout focuses on the Cuban revolutionary, Fidel Castro, who was the leader of the 1959 revolution. The handout continues through the years until his death.
What does Cuba look like today? The attached presentation contains photographs taken by my sister and my niece on a trip to Havana a few years ago. Note the Spanish style architecture and the old cars. Very little has changed since the 1950's and as the economic sanctions still continue, little is expected to change in the near future.
Post-War Independence

The struggle for freedom and independence from Western European rule was an era of both violence and civil disobedience (non-violent protest). The emergence of Gandhi in India laid the foundation for other nations such as South Africa and the United States to obtain equal rights and universal suffrage, the right to vote for all people.

Special assignment: Primary source reading with key questions on The Creation of Pakistan.

Apartheid
An overview of the events that took place in Africa are included in this handout called African Independence Movements and it tells the stories of the fights for freedom from old imperialist rule after World War II.
Many of the problems faced in Africa today still stem from European imperialism. To examine a specific situation, one can look at the White-rule in South Africa and the story of Rhodesia and the handout on Apartheid. In addition to these documents, I have added a political cartoon on Apartheid.   When he died, I created a short presentation on Nelson Mandela, which is a look at his life and the changes that he brought to South Africa.
The following documents is a summary of the Apartheid Laws and illustrates what life was like in South Africa for the African people under the white rule. 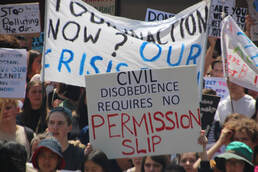 Where was Yugoslavia?  What was once a beautiful and peaceful country was stricken by religious and political upheavals and the outcome is seen with this chart on the conflict in Yugoslavia.

Dictators and political extremists took over certain regions of the world. One of the worst genocides in modern times took place in the "Killing Fields" of Cambodia by the Khmer Rouge under the leadership of the dictator Pol Pot.

The emergence of China as a global power can be seen in the next two handouts which are Deng Xiaoping and Economic Reform in China and the subsequent changes seen in the Modern China handout. It was not just China that grew politically and economically during this period of time. The Modern Southeast Asia handout discusses how this region also changed and became a key component in world trade.

The Caribbean and South America was not without its problems as evidenced by the Haiti and the Duvaliers lesson and this Modern Latin America handout. I recently came across this poem and I created a special handout called "I invoke you" which describes the anguish and problems that are faced in modern Latin America.

Another problem region in the world today is the Middle East. It is in a constant state religious and political struggles. Oil is a key geographical resource and factor to the wealth of this region and the following is a chart on the OPEC member nations. Efforts to keep the peace is found in the Middle East and the United Nations lesson but the events of September 11 and the act of terrorism led by Osama bin Laden have led the area into further political tensions and conflicts. 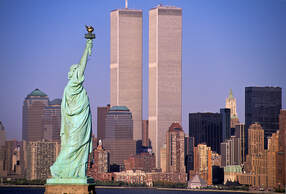