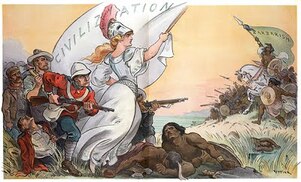 Trivia: Of the 193 members of the United Nations, Britain has invaded 171 of them!
Source: Snapple cap "Real Fact" #1470
Imperialism
Power, wealth, raw materials, competition and global superiority will lead the Western European countries into a time of conquering weaker nations. The Causes of New Imperialism chart illustrates the motivations for control and the Causes and Effects of Imperialism is seen in this link. It was said that "the sun never sets on the British Empire" and the following map clarifies this statement with a map of the British Empire by 1900.

The greatness and power of Britain is also seen in its architecture and the attached photos are samples of British architecture during the Victorian Era. 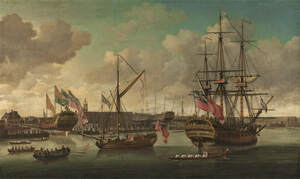 To complete Imperialism, I have divided the following content into geographic and somewhat chronological sections.
India
​Before the British took control, the region was controlled by the  Ottoman, Safavid, and Mughal Empires  and this map shows the areas of their control. In addition, the Mughal Empire handout explains how the region was ruled prior to its foreign take-over. I have added a Map of India showing its importance and prime location which is essential to understanding the Jewel in the Crown lesson. Imperialism was justified by the theory of Social Darwinism and the following four documents validate this social and political concept. They are the Black Hole of Calcutta images, an event that produced a great deal of anger back in Britain towards the treatment received by Indians and a set of Colonial pictures of India, the White Man's Burden poem and a second documents that are the lyrics to an old song called Mad Dogs and Englishmen.

The British East India Company will control the production of opium in India and will later use it to open China to foreign trade. The two illustrations are a picture of an Opium Factory and an artists impression of an Opium warehouse in colonial India.

Today, after its independence in 1947, India is a different country and the following highlight the nations developments and subsequent problems. India Past, Present and Future is a handout covering many events in India's history which also focuses on Kashmir which is a handout of the current political problems in this region. Finally I have added an article on Child labor in the cotton industry which tells of an ongoing problem in the region today. ​
​Africa
By the Mid 1800's the control for Africa was underway and many European nations were competing for the best lands to take over. Between 1884 and 1885, the Berlin Conference took place and the attached shows two political cartoons that relate to the events that took place over the future division of Africa.
The political situation is shown on the Partition of Africa map and the Scramble for Africa lesson details the nations and regions gaining dominance over the weaker African regions. European political dominance is seen with the Scramble for Africa cartoon and the famous Cecil Rhodes Cape to Cairo image.  To further show the European domination of Africa I have added a Colonial languages of Africa map which further illustrates the concept of imperialism in Africa. One of the new raw materials demanded by European nations was rubber. This short handout shows How rubber is tapped  in a short series of photos. Resentment towards Social Darwinism is clearly seen in the Black Man's Burden poem, a comparison to the poem written by Rudyard Kipling describing life in India.

I recently saw this picture of British Imperialism in Africa in the Slavery Museum in Liverpool, England. I have made a document with this picture, titled Merry Xmas African Oil Nuts Company and Miller Brothers, Badagry, Nigeria. It is a picture that creates an extended discussion into how the British treated the native peoples during Imperialism, especially in Africa. What is most important is the year that it was taken so open the link and look for the year and then discuss how relevant it is to Imperialism.

I have also added three supplemental documents related to the Scramble for Africa. The first is a map of the Boer War map that explains some of the events. Secondly, I have created a document consisting of two readings (with key questions at the end) that discusses Two Views of Imperialism in Africa. Finally, the lesson on the Suez Canal is important to understand because of its importance to British India and later on during the era of globalization.
China
In 1644, China saw the emergence of the Qing Empire, the dynasty known as the Manchus. They would rule until 1912 and would be the last dynasty to rule China. This handout covers the Qing rise to power. During the Qing rule, the once isolated China now became the target for British and global Imperialism with the Open Door Policy and the end result will be the collapse and end of the dynasty system. All of this can be found in the Imperial China lesson. To supplement the handout I have attached a map of China during the Qing Dynasty so that you can clearly see Manchuria, the two main rivers and cities of China and the area of the Great Wall.

A key part of the downfall of China is supplemented here with the Opium Wars summary of the two wars and the benefits gained after the British victories and to reiterate the cause of the wars, I have again added the photo of an Opium Warehouse.

Japan
The Opening of Japan began with Commodore Matthew Perry's Black Fleet and ended with the Meiji Restoration and Japan's dominance of Asia that could last until World War II. This story of social and political progression can be found in the Imperial Japan lesson which is also illustrated by these Japanese propaganda pictures of the Sino-Japanese War.

Southeast Asia
This region of the world was greatly affected by European domination. Raw materials such as rubber and tin, combined with the plantation crops that would grow in abundance in this region made it a "target" for European domination. A summary of this region is found with my presentation on Imperialism in Southeast Asia. ​
To finish this unit and to better understand what is going to take place at the start of the next century I have created a two-page bullet list of events that have either taken place or are starting to take place around the world called An Unsettled World, 1890 to 1914. The document is separated by geographic regions for ease of understanding.

(Most of this handout was taken from a great textbook that I acquired at a past AP reading called Worlds Together, Worlds Apart). 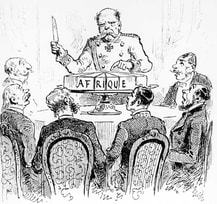