​This age of British domination would become known as the Victorian Era, named after the British Queen. To better understand the changes that took place during her rein, this link goes to the English Heritage site and their pages offer an insight that is called An Introduction to Victorian England. ​
Major social, political, and economic changes will take place in this time period and they can be seen in the Liberal and Conservative Ideas during the 1800's document and the Characteristics of Early Capitalism handout. There will be uprisings within the working class who saw little financial and working benefits of industrialization. Political theories will emerge, as seen in a comparison between Communism, Socialism, and Capitalism and the major differences between Socialism and Communism. It is very important to cover these political systems at this point in time as they will be a foundation for a full understanding of future developments.

Special assignment: Understanding charts and tables covering demographics. Open the following link and analyze the chart on Populations of Western Europe from 1700 to 1850 then answer the questions that follow. Use complete sentences for each of your answers.

To end this section a global consequence of the industrial revolution is seen in the lesson on the causes and effects of the Irish Potato Famine. This is an important lesson as it is an excellent response to questions on the examination about diasporas and long distance migrations.
​ 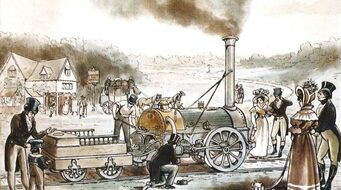