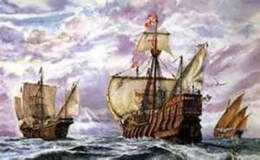 In addition to these handouts are two other documents: A comparison of the master ship of Zheng He to that of Christopher Columbus and then a short video assignment with key questions to answer at the end on the voyages of Zheng He.
To supplement the drawing and the video, this link opens to a detailed map of the Voyages of Zheng He and shows the vast amount of area covered by this great navigator.
Western European global domination begins during the Age of Discovery and a chart of European Explorers shows who they sailed for and the new, uncharted lands that they discovered.

The main reasons for the European Age of Exploration were Gold, Glory, and God but there was another important factor as to why Columbus was given three ships, the Nina, Pinta, and Santa Maria. The Spanish Inquisition had left Spain bankrupt. Very little is discussed about this factor however one of my students in the 2020/2021 school year added incredible insight to the events in Spain. What was a Morrano? The answer to this question can be found in the details of my student's family history in the story of Don Abraham Seneor. Thank you Aliza for allowing me to include this handout on my website. It is a wonderful historical source.

Many new fauna and flora were found in the New World and a useful document added here is called the Origin of World Crops as it will help relate to the next section. What took place across the globe is seen in an academic article on The Columbian Exchange and this is accompanied by a map validating the interregional movements of crops, animals, and diseases during the Columbian Exchange. In addition, I have added a special reading on Foods that Changed the World.

Below are two special assignments: The first is a required reading in an Article on Christopher Columbus by Dr. Alan Singer, my mentor at Hofstra University and then Bittersweet: Sugar, Slavery, Empire and Consumerism in the Atlantic World, a Podcast with a transcript that is followed by seven key questions to be answered based on the content.

The European treatment of Native Americans did not benefit the European colonizers as they had initially hoped under the goals of Gold, Glory, and God. Instead they had to find a new source of labor for their cash crops, as indicated in the lesson on the Overview of the Slave Trade. A website called Slate.com has an excellent interactive, animated timeline map of the Atlantic Slave Trade over 315 years. Please take a look and you will see how it links the voyages from Africa to the Americas in just two minutes.

Another excellent document to validate the above lessons is a short handout that shows a comparison of the ethnic compositions of colonial societies in Latin America that includes a chart on the different Spanish class systems that were created in the New World.

Special short movie: Teaching Tolerance recently released a 12 minute video called The Forgotten Slavery of Our Ancestors which documents the Native Americans being put into slavery by the Europeans. I encourage you to watch in its entirety. Start by reading the introduction; the video is half-way down the page.
​
Special Assignment: Created by the Bill of Rights Institute. Open the link that follows, scroll down and read the testimony and then answer the questions of Bartolome de Las Casas' Account of the Destruction of the Indies. 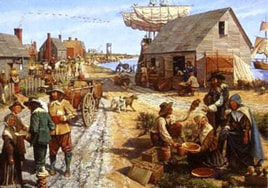 In North America, the British had a different approach to colonization. It began with the colony in Jamestown and then continued with thousands who escaped religious persecution. The Mayflower Compact extract is a unique document in North American history as it is the first known written agreement on political rule within the colonies. The pilgrims, or the Puritan Migrations to the New World began to change society and help create the Thirteen Colonies.
​
It is important to know how these regions developed due to the geography and climate of the Eastern regions of America. In addition, the attached is a Thirteen Colonies blank map assignment so that you will know each colony within the correct region.

Colonial life in North America is often a question on examinations and one of the best examples to understand this cultural change is to analyze a typical New England village drawing. To enforce colonial rule, the British created a unique political system and this handout shows How Mercantilism worked and the illustration in the document shows the European view. A more in-depth document on this is the Mercantilism in North America handout. The last document in this section covers another difference of labor systems in North America and is a presentation on  Indentured Servants.


​Economics played a major role in both North and South America and the following documents create a comparison that is a frequently used short-answer or essay question. The first is a reading assignment with questions based on Potosi and the Spanish labor systems in South America called Silver as a Major Global Commodity. The attached link is a full sized map of the Global Silver Trade that shows the routes taken that are mentioned in the handout.
In addition, I have created a special assignment with primary source documents on Potosi and the Global Silver Trade.
​
The SAQ - Short Answer Question for the AP examination
How to write the APWH Short Answer Question instructions. [Labor Systems in the Americas]
A geographical change took place during this time period. It was called the Great Dying and the Little Ice Age and this handout covers both the continuity and the changes that took place effecting world history.
Under London Bridge are five stone slabs built into the south wall. They tell the story of London in the early 1800's and the first slab covers the last Frost Fair of London in 1814. The fairs related to the Little Ice Age and this short handout explains what these fairs were and how they were a major part of the history of London.
A comparison of the Santa Maria of Christopher Columbus to that of one of the master junks in the fleet of Zheng He. 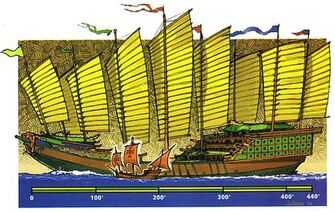