Mr. Hurst's website
Globalization (c. 1900 to the Present)
The syllabus is finally coming to an end but there are just a few more "little things" that have to be covered. It is time to review your knowledge of where countries are and there is no better place than to start with these Map Blanks for geography practice.

Global Issues Today, a selection of websites for information and World Facts, provide a quick link to learning more about today's society.

What do we mean by the term Developing Nations? To supplement this document is a list of Least Developed Countries. An interesting one-page document to further link these nations is called The Changing Economies of Developing Nations and it shows the economic progressions a nation goes through during its growth periods. However, some of the major problems these areas face is found in the Little things that mean a lot handout.

​Religious and political persecutions still continue as seen in the handout Genocide - A Global Concern. Maybe the world needs a little more "Respect" - What is a Rastafarian?
Finally I have added several short documents: the Urbanization and Modernization lesson and an insight towards Women in the World, a short lesson that shows their roles and discrimination within certain societies. One of the women in modern society who changed her nation politically is Aung San Suu Kyi of Myanmar. There are often questions about her plight on the examination and this handout covers the events during her struggle for freedom for herself and her people. ​
This section of the unit covers some of the global problems faced and the attempts to solve them after World War II, during the Cold War era, and into the 1960's. A common subject asked on examinations during this era covers the following handout on the Green Revolution,  and an insight to how it was created and implemented can be seen with the lesson on Norman Borlaug who was one of the main scientists who led the campaign to end world hunger.

The environment and the use of hazardous chemicals became a major issue in the 1960's and the following handout (with key questions at the end) discloses two excerpts written by Rachel Carson and Edward O. Wilson called the Approaches to the Environment in the 1960's. Thank you Rachel Carson, Joni Mitchell and Counting Crows:
​
Hey farmer, farmer
Put away the DDT
I don't care about spots on my apples
Leave me the birds and the bees
Please!
[Big Yellow Taxi] 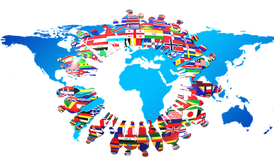